This just in! The folks over at CNN independently confirm that Mrs Carter lip-synced "The Star-Spangled Banner" during Monday's inauguration ceremonies in Washington. Whaaaaat?! We are baffled by the national attention this non-story has gotten. What's even more baffling is that it's a breaking news bulletin -- on CNN! Anywho, CNN's national political correspondent Jim Acosta spoke to a member of the inaugural committee who said Mrs Carter made the decision "not to sign live" on Sunday night because she didn't have time to rehearse with the US Marine band. This official added he was "puzzled" at Mrs Carter's decision, but she's a "very good live signer" and was "spot on" when she recorded the track which she lip-synced to. Jim also spoke with Bob Goldstein, who owns the company that provided the audio equipment for the inauguration. He also, albeit indirectly, confirmed that the singer lip-synced. Mrs Carter -- who is preparing to sate the Beyhive with a half-time show performance at Super Bowl next month and release an album shortly thereafter -- had no comment. Now, can we all get back to the important news -- like the first lady's bangs? Geesh!

Note: Above video contains the two segments that aired on CNN today. 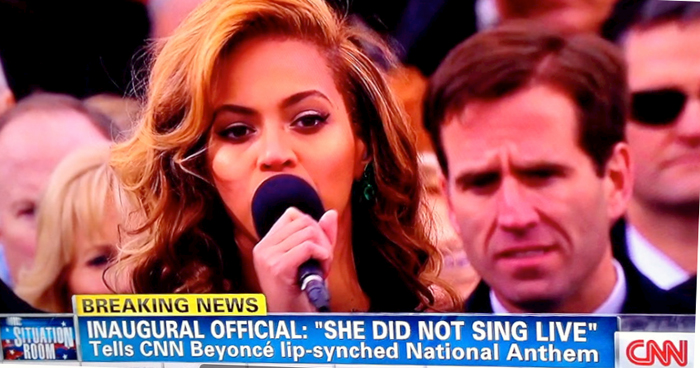