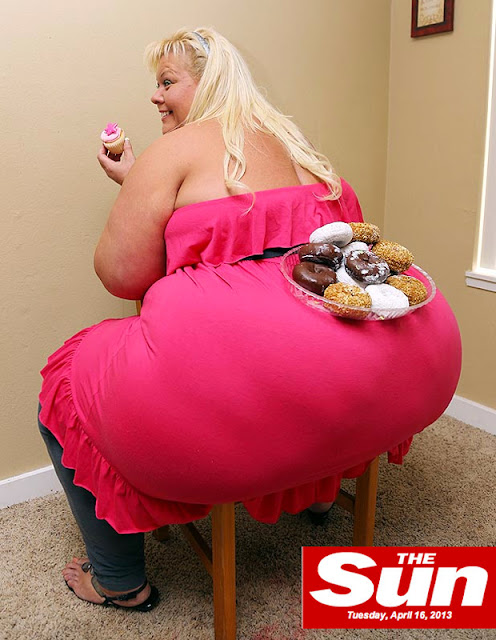 In the "Real Housewives of Atlanta" battle of donkey booties vs stallion booties here comes Barbie Edwards to snatch some wigs because her double-wide ass doubles as a shelf. It does. The 41-year-old mother of three from Washington state claims to have the world’s largest butt, and within the last six months men have paid her $28,000 to see her balance trays of food and drinks on her shelf, er, butt.


“I often use my butt shelf to balance food on while I’m preparing family meals. It’s also great for balancing cleaning products on when I’m tidying the house or snacks when I’m lying on the sofa at night. [...] I receive hundreds of messages from men every day, requesting pictures of me in my underwear. There is no specific type of man who loves my bum — they range from farmers to business executives. They pay for pictures and some like me to balance things on my bum — often plates of doughnuts or pizzas to show how big it is. At first I found these requests strange, but now I love it because I know it’s making my fans happy.” However, Barbie’s extraordinary figure does cause problems. She admits that her humongous hips regularly get stuck in turnstiles. On planes and trains Barbie requires two seats and she often gets bruises using public toilets because her bottom is so wide that it jams against toilet roll holders. She said: “Often I cannot fit into dressing rooms in shops and at work I have a special chair to accommodate my bottom’s unique width and shelf. I constantly knock over displays in supermarkets when shopping. I am a wide load and sometimes it’s difficult to judge whether I can fit through certain spaces. When eating out I have to phone ahead to restaurants to ensure they have booth seating, because I can never have a normal chair." Barbie, who drives a minivan because cars are too small for her frame, was chubby as a child. But she says her extreme pear-shaped body started to develop when she hit puberty. “I was teased relentlessly at school for my size and lived in tent-like dresses. Looking like this was a daily battle as a teenager and I was very miserable. When I left school I weighed 300 pounds and half of that was in the butt region.” After three pregnancies, Barbie now weighs more than 500 pounds — but is no longer bullied for it. She says: “I am healthy and happy that finally my unusual figure is celebrated rather than criticised. “I work very hard and I am helping my kids with some extra money from my modelling. I want to show other girls with big bottoms you can be sexy and successful. I’m like a giant Kim Kardashian. My bum is a beauty and despite once hating it, I’d never change it.”

We're not mad at her hustle, but healthy at 500 pounds? Comparing yourself to Barbie and Kim Kardashian? Girl, bye!

Sidebar: This is what she eats on an average day. For breakfast: pancakes, bacon and syrup WITH cereal and toast; For lunch: tacos with cheese (and all the toppings) AND AN ENTIRE chocolate cake; For dinner: large serving of homemade lasagne with bread. AND for snacks, she eats another ENTIRE chocolate cake and a bag of peanut M&Ms.

I want to see her in underwear. Does anybody has her contact information?