Is Bobbi Kristina Pregnant With Her 'Adopted' Brother's Child? 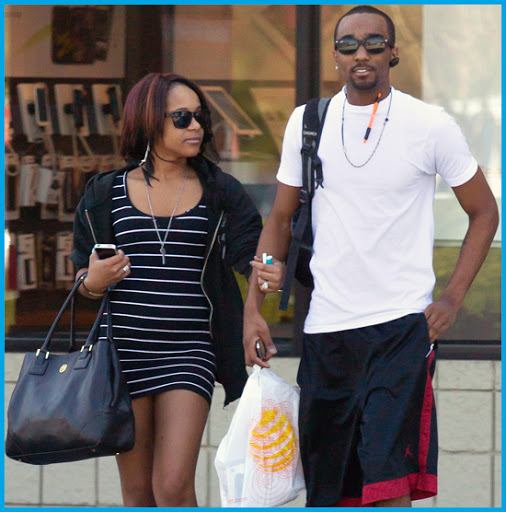 Bobbi Kristina, the 19-year-old daughter of the late Whitney Houston is telling friends she's pregnant with Nick Gordon's baby, according to the National Enquirer. If you don't already know, Nick, 22, is her gun-wielding "adopted brother" who was taken in by Whitney back in 2008 after his stepfather kicked him out for reportedly not "following the rules." In addition to helping around the house, he began supplying weed and other drugs to Whitney -- and Bobbi Kristina, according to the report. Now that Whitney has passed, the two have grown "closer" and Bobbi Kristina is pregnant and is engaged to be married. Her family is completely against the idea.


While Nick has publicly denied that they're a couple, they're telling friends that she's pregnant and they're planning to tie the knot in a quickie Vegas wedding, sources say. "Krissi says that shortly before her mother's death and then after her funeral, she was nauseous a lot," said a family insider. "At first she thought it was due to stress, but the nausea lasted for more than a week so she secretly took a pregnancy test and it came back positive! Krissi says she's going to name the baby after her mother and she's also planning to marry Nick secretly in Vegas so the family can't interfere. She's madly in love with him, and she thinks her mother would have approved of their marriage because she loved Nick too."....Friends and family, especially her grandmother Cissy Houston, fear Nick is pushing her into marriage so he can live off her money, sources say. "Cissy thinks Nick will eventually cash in on Krissi's fortune and use it to continue living the luxury lifestyle he's enjoyed with her and Whitney," a family insider revealed.
source: National Enquirer, April 2, print edition

Reading this, we can't help but wonder if the person who allegedly sold Whitney's casket photo is also the "source" of this story. Anyhoo, the tabloid has another bombshell revelation. According Bobby Brown's "close friend" Derrick Handspike, in the days before her death, Whitney rekindled her relationship with her ex-husband and they were planning to remarry. Derrick has been everywhere giving interviews in defense of Bobby. We actually remember he was Nancy Grace and she, in not so many words, called him a donkey then turned his mic off for talking nonsense. You may be wondering if Whitney and Bobby were back together, what happened to Ray J? Derrick has an answer for that; He says Whitney and Ray J's relationship "turned into more of a friendship." And what about Bobby's fiance Alicia Etheredge? Derrick says they broke up last November!!! They must've rekindled their relationship, because we believe she was with Bobby during his brief appearance at Whitney's funeral.


According to Derrick, the passing of Bobby's father Herbert -- who lost his battle with cancer at age 82 on Dec. 10, 2011 -- sparked Whitney and Bobby's hush-hush reconciliation. [After the funeral, Bobby flew to Atlanta.] For the next week, Bobby [was] holed up at Whitney's home, where the rekindled their romance and their intimate relationship, said Derrick...."They slept together in Whitney's bedroom, and talked about what kind of wedding they'd have. Bobby told me, 'That week was the happiest I've been. Whitney and I got that old feeling back, and we were a family again.'" Bobby shared the couple's dramatic decision to re-wed with their daughter Krissi during diner at a Beverly Hills restaurant.
source: National Enquirer, April 2, print edition

This sounds like nonsense to us, but who knows. Maybe Bobby will expound in the book he's shopping about his relationship with Whitney.


UPDATE, Oct. 11: Bobbi Kristina has confirmed that she and her "brother," Nick are engaged.